Over the last two weeks, Russia has been destroying the “living pipeline” that has allowed Turkey to steal tens of millions of barrels of Syrian crude oil, much of it at peak market prices, while only paying their ISIS allies a pittance.

This process isn’t new. Turkey did this all during the Bush era, having cut a deal with US “manager” Paul Bremmer, a deal VT insiders helped manage for Bremmer and that I was witness to personally. 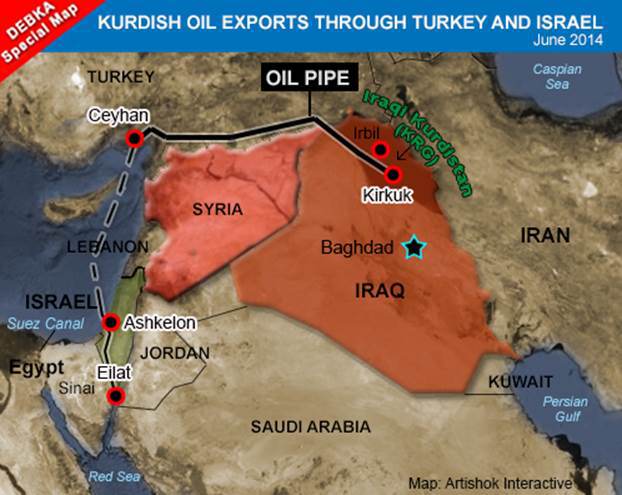 The game involved playing [Baghdad, Iraq] against [E(I)rbil, Iraq In The Kurdistan Region]and bleeding off oil revenues from the Kirkuk Oil Fields, largest oil reserves in the world, as they moved by pipeline through Kurdistan and into Turkey.

“Iraq’s 2014 fractional reserves have grown to 90T aka; M2 thus slowing down the Iraqi money velocity towards stagnation.”

Report: Israel Importing Three-Quarters of its Oil from Kurdistan

There they were offloaded onto American tankers in the Mediterranean where these huge ships, largest in the world, were filled with oil but it was never recorded and the oil never paid for.

During the Bush era “War on Terror,” up to 40% of Iraqi crude oil, up to half of what was sent through Turkey on the Baku-Ceyhan pipeline was stolen.

Our investigations between 2005-7 which included meetings between Gordon Duff and Iraqi and Kurdish leaders in both Erbil and Tikrit covered this issue.

Vladimir Putin accused Turkey of allowing ISIS Terrorists to run a “living oil pipe” across its border as he upped the ante in the row over the downing of a Russian jet.

The Russian President said that reconnaissance footage, shared with world leaders at the G20 summit earlier this month, showed that oil was being smuggled through terrorist-held areas in Syria into Turkey “day and night”.

There were “vehicles, carrying oil, lined up in a chain going beyond the horizon”, he claimed.

Speaking after talks at the Kremlin with the French President Francois Hollande, Putin accused Ankara of false naivety over ISIS’s huge oil operation.

“Let’s assume that Turkey’s political leadership knows nothing about it – it’s theoretically possible, albeit hard to believe,” he said. “There may be elements of corruption and insider deals. They should deal with it.”

Putin has gone for the jugular after the Turkish military shot down the Russian SU-24 jet after accusing it of violating its airspace during an operation in northern Syria. The incident is thought to be the first time in 50 years that a NATO member has downed a Russian plane.

Turkey is acutely sensitive to claims that it is turning a blind eye to ISIS, a view held not only by Russia but also by Western states who believe that Turkey has not done enough to prevent terrorists from slipping across its 500-mile border with Syria;timesofindia.indiatimes.com reported.

Around 500 fuel tanker vehicles transporting illegal oil from Syria to Iraq for processing have been destroyed by Russia’s Air Forces, the General Staff said.

“In recent years, Islamic State (IS, formerly ISIS/ISIL) and other extremist groups have organized the operations of the so-called ‘pipeline on wheels’ on the territories they control,” Russian General Staff spokesman Colonel General Andrey Kartapolov said.

Hundreds of thousands of tons of fuel have been delivered to Iraq for processing by trucks and the revenue generated from these illegal exports is the one of the terrorists’ main sources of funding, he said.

The spokesman displayed images showing convoys comprised of hundreds of vehicles transporting oil to back his assertion.

“In just the first few days, our aviation has destroyed 500 fuel tanker trucks, which greatly reduced illegal oil export capabilities of the militants and, accordingly, their income from oil smuggling,” Kartapolov stressed.

The spokesman also said that the Russian military has begun developing proposals for joint military action with the French Navy against the terrorists in accordance with an order by President Vladimir Putin.

“This joint work will begin after the arrival of aircraft carrier Charles de Gaulle to the Syrian shores,” Kartapolov explained.

Russia has been bombing Islamic State and other terror groups in Syria since September 30 at the official request of country’s president, Bashar Assad.

On Tuesday November 17, 2015, Russia’s fleet of 25 long-range bombers joined Su-34, Su-25, and Su-24M warplanes conducting operations in Syria to double the number of airstrikes against the militants.

On the day Moscow officially confirmed a terrorist attack as the cause of last month’s downing of a passenger plane in Egypt, the Russian military hit over 200 terrorist targets in Syria in 127 sorties.

The escalated Russian operation involved not only warplanes flying from an airfield near Latakia, but also strategic bombers operating from Russian territory.

Russian strategic bombers such as Tu-22M3s, Tu-95MCs and Tu-160s were previously used for patrol missions as part of Russia’s nuclear deterrence. Their deployment in a conventional armed conflict marks an evolution in Russian military tactics.

It was also the first time Russia used in combat a new air-to-surface missile, KR Kh 101/102, which has been in service since 2012 but was not shown in public before. The missile can be seen inside a bomber bay in a video released by the defense ministry. RT

The Obama negotiations with Iran came with a reduction to their oil output. Russia & Iran I believe will not abide by this and nor should they, but for now it keeps Israel & U.S. stymied and w/o international cause.

Oil from the Kurdistan region is being funneled into Turkey then to Israel. Obama has given Netanyahu $40 Billion USD to purchase this oil
and profits are smuggled to the M.B. via Golan Heights area. Russia is bombing the M.B. terrorists around Golan Heights. Obama & Nety are
working for the same side [NWO Bankers] and they are furious. Bagdad is also furious about Kurdistan [corrupt government] smuggling oil to Turkey

So with Bagdad upset over the corrupt in Kurdistan is a good sign. But there are still many corrupt in Bagdad. Waiting to see if Abadi is different
~ he was Maliki’s advisor in the old regime remember and trained in Britain for 20 years.

International bankers are desperate as Putin has now checkmated their NWO.