“Lobby in US is now really muddying the waters and not allowing to reach an agreement,” Russian Foreign Ministry’s official spokeswoman Maria Zakharova said 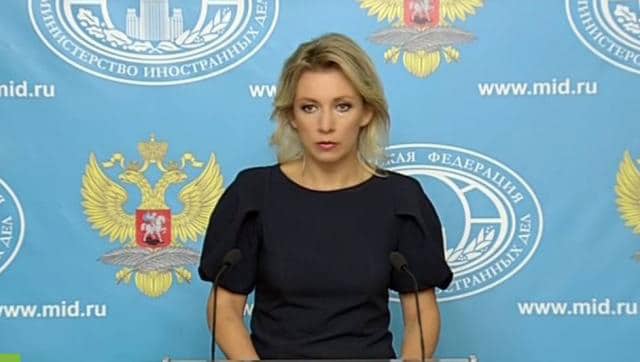 MOSCOW, October 2. /TASS/. The refusal of a diplomatic settlement in Syria may result in a full-scale war which will lead to “tectonic shifts” in the whole region, Russian Foreign Ministry’s official spokeswoman Maria Zakharova said in the “Right To Know” program on TVTs channel.

“Lobby in US is now really muddying the waters and not allowing to reach an agreement,” Zakharova said. “There logic is — ‘why do we need diplomacy, UN, talks, international law, why do we need any commitments on the international arena, when there is power and the right of a powerful one, and there are our own national laws which may stand above other laws and be strengthened by methods of resolving a problem by power. We already know this logic, there is nothing new about it. It usually ends with one thing — a full-scale war,” she added.

The spokeswoman declined to answer the question on Russia’s possible reaction in case the United States uses force against Syria. “I cannot speculate on what will happen if… This is the task of experts. May task is to explain why it is so important to stay in the framework of the agreements,” she said. “If US starts a direct aggression against Damascus and the Syrian army, this will lead to scary tectonic shifts not only on the territory of Syria, but in the whole region as well,” she noted.

US State Secretary John Kerry earlier said that Washington may freeze cooperation on Syria with Moscow.